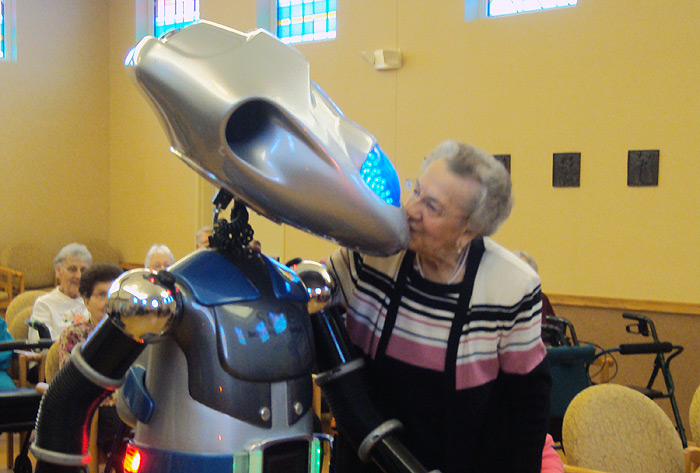 Loneliness is already a crisis in older adults but using non-threatening robots are now one way of combating Geriatric Depression. 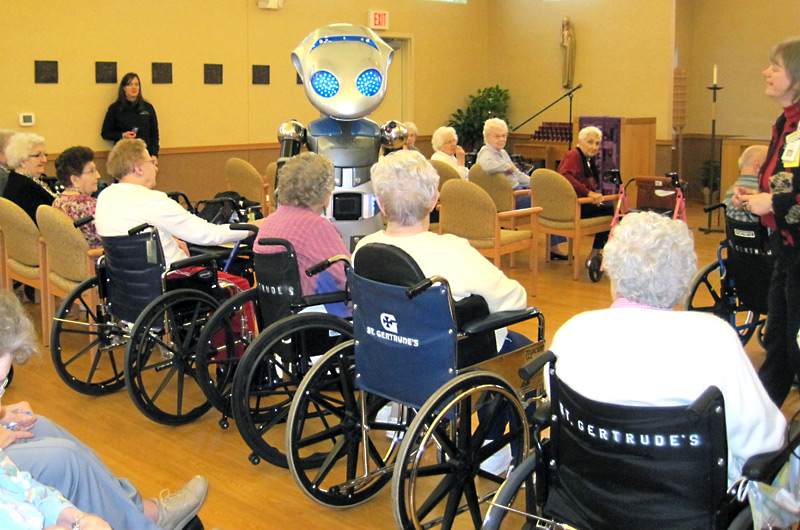 Recent research has revealed that robot therapy has the same effects on people as animal therapy. In addition, it is being recognized as a new method of mental healthcare for elderly people.

But 45 years ago, we already knew that.
Introducing a non-threatening, gentle robot into environments like hospitals, elderly care facilities, and centers for children & adults with disabilities would repeatedly prove therapeutically effective at improving communication. Through humor and dialog, International Robotic’s social robots on behalf of our clients would – for over 45 years – be able to connect with thousands of individuals who were withdrawn, depressed, angry or confused. It gives us great satisfaction to now observe how the scientific community is developing robot caregivers around the world.

Mental healthcare of elderly people is a common problem in advanced countries. Recently, high technology has developed robots for use not only in factories but also for our living environment. In particular, human-interactive robots for psychological enrichment, which provide services by interacting with humans while stimulating their minds, are rapidly spreading. Such robots not only simply entertain but also render assistance, guide, provide therapy, educate, enable communication, and so on. Robot therapy, which uses robots as a substitution for animals in animal-assisted therapy and activity, is a new application of robots and is attracting the attention of many researchers and psychologists.

The seal robot named Paro (yep…looks like a Baby Seal) was developed especially for robot therapy and was used at hospitals and facilities for elderly people in several countries. Recent research has revealed that robot therapy has the same effects on people as animal therapy. In addition, it is being recognized as a new method of mental healthcare for elderly people. LEARN MORE

Robotic pets are now the next big thing in Dementia care. Lifelike dogbots offer a soothing presence without needing to be fed or taken for a walk. Here’s a great article about it: NBC NEWS

it makes sense that much of the research on AI’s potential to support aging individuals is focused not on just building virtual friends, but also on helping elderly individuals and their caregivers with practical tasks, especially those that help an older person age in their own home. READ MORE ABOUT ROBOTS & AGEING

It has been a privilege for our social robots to visit Elderly Care facilities, Hospitals, Shelters, Rehabilitation Centers, Special Needs Schools, Developmental Disabilities Programs and Autism providers all over the world. We have met extraordinary people in the process, and learned extraordinary things. We still believe – and the scientific community now agrees –

LAUGHTER IS ALWAYS THE BEST MEDICINE. 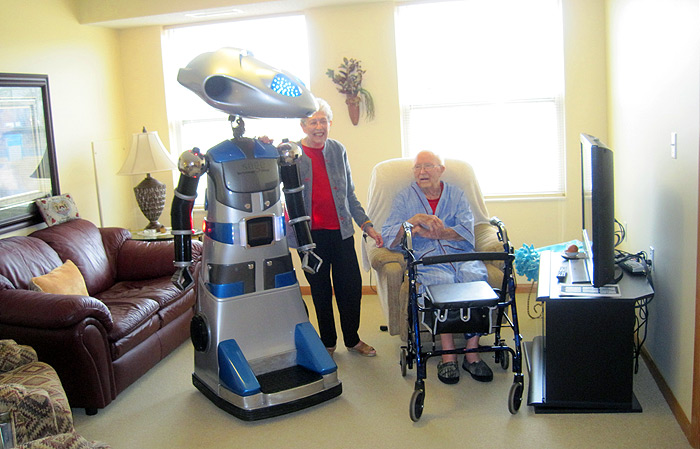 Our mantra: “Laughter is the best medicine.”

WANT TO RENT A ROBOT (or two?)
JUST FILL OUT THIS FORM: 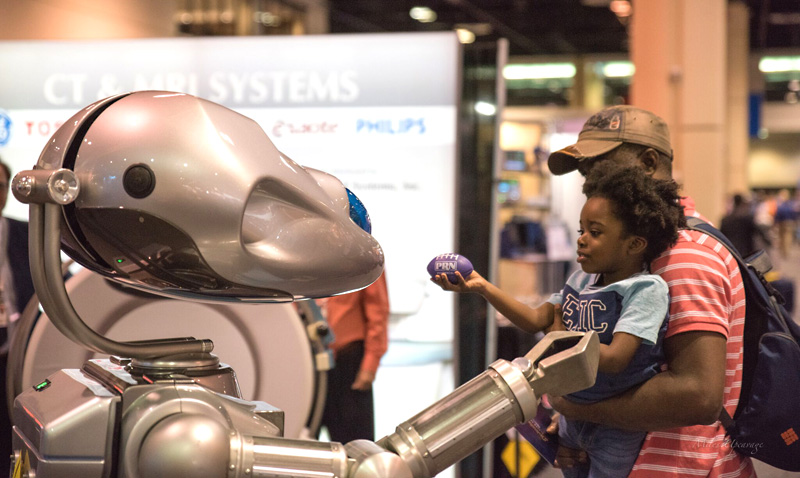 The best part of what we do is the kids. The little humans. We make them laugh, they make us laugh. 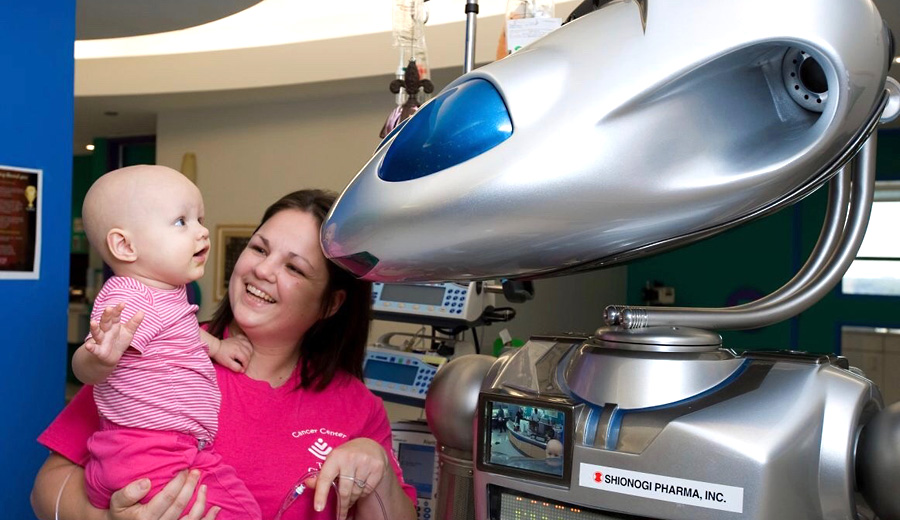 Some kids are ill. Some cannot see or hear. Others have tough circumstances and do not smile easily.

We have experienced countless tender moments for over 45 years with the children of the world. We thank each and every one of them for those precious moments. Many are now grown with grandchildren and occasionally, we hear from them. They tell us that they remember feeling big and strong…they felt happy and that those feelings never quite left them.

It is our honor, and our privilege to visit Hospitals, Shelters, Rehabilitation Centers, Special Needs Schools, Developmental Disabilities Programs and Autism Providers (to name but a few). The awe and joy of children when they interact or touch Millennia or SICO or GEMO – time and again – transcends social barriers and constraints. These children say and do things that surprise everyone proving what we’ve always believed. We all have the potential to overcome. Humor, through the magic of kindness, always works wonders.

SEASONS GREETINGS TO ALL & MAY YOUR DIODES ALWAYS BURN BRIGHTLY. 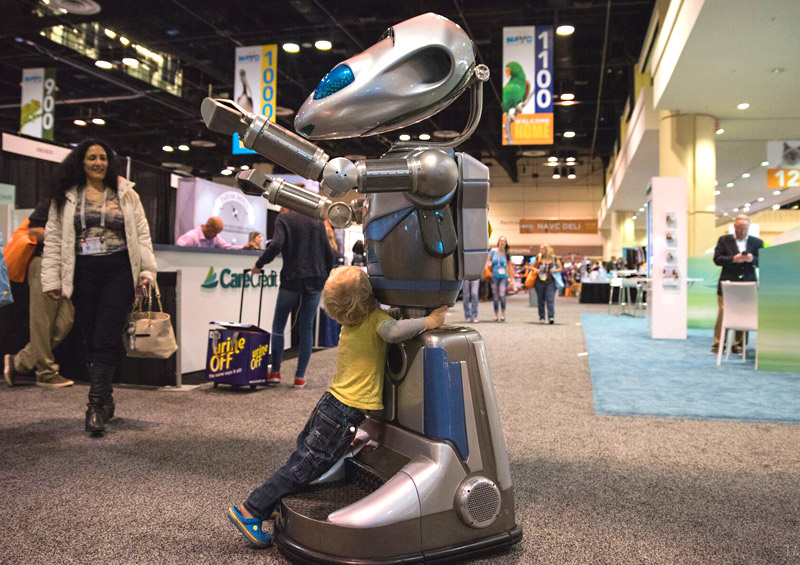 GOODWILL VISITS: As the pioneers of Social Robotics, clients often request that our Robots go out and make a kid smile. We do exactly that.

WANT TO RENT A ROBOT (or two?)
JUST FILL OUT THIS FORM: